The Fifth Anniversary of Nine Eleven is another goode example of jihad communication managed by  the jihadist network’s As-Sahab media branch, the al-Quaeda production organization, who announced in forums their realizations.

On September 2nd video Al-Qaida’s deputy leader Ayman al-Zawahri appear with a man identified as an American member of the terror network, inviting Americans to convert to Islam. The 41-minute video entitled “As-Sahab Media Productions presents An Invitat
ion to Islam by Sheikh Ayman Az-Zawahiri and brother Mujahid Adam Yahya Gadahn -‘Azzam Al Amirik” was posted nine days before the fifth anniversary of the Sept. 11 terror attacks, had footage of al-Zawahri and a man the video identified as Adam Yehiye Gadahn, an American who the FBI believes attended al-Qaida training camps in Pakistan and served as an al-Qaida translator.

zzam al- Ameriki, appeared for the fifth time: he plays a crucial role in the video released on Saturday, September 2nd. Although, it must be emphasized the role of Azzam the American also knowns as Adam Yahiye Gadahn presented to the audience-but already well-known – by Ayman Al-Zawahiri on September 2nd. Born Adam Pearlman,  he is the grandson of a prominent Jewish doctor (Adam-Gadhan) and the son of Phil Perlman, an American musician who converted to Christianity. He was raised on a Riverside (California) goat farm, where his family, in accordance with halal food requirements, reared goats to sell them to some Muslims dealers. In 1995 Adam  posted an essay to the University of Southern California web site describing his conversion, entitled “Becoming a Muslim” in which he explains his difficult youth experience (http://www.francesfarmersrevenge.com/stuff/archive/oldnews5/becomingmuslim.htm).  As a matter of fact, he was both  “obsessed with demoniac heavy metal music” and “began to listen to the apocalyptic ramblings of Christian radio’s “prophecy experts”. It is interested to notice that he first discovered Islam through the Internet. He stated that he began to visit the religion folders on AOL and the Usenet newsgroup where he “found discussions on Islam to be the most intriguing” In 1998 he moved to Pakistan where he married an afghan refugee. Gadhan has become the official Al-Quaeda translator: he is the popular of important anchormen and then has turned into a star within the jihadist media system star who speaks to the Western audience. 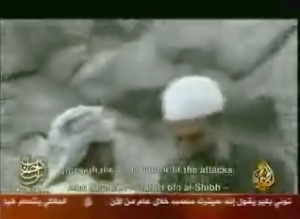 On September 7th video with Osama, appear many “brothers” identified in Sheikh Abu Abdullah, Ramzi Binashibah, Ramzi Binashibah (involved in 9/11), Dr. Ayman, Abu Hafs al-Misri (the Atef murdered in a raid in 2001), KSM. There are also two brothers named al- Shehri Wail and Walee: while Wali al Shehri was one of the hijackers of  American Airlines Flight 11, Hamza al-Ghamdi was on United Airlines Flight 175. They both stated their last testament before the WTO attack. On the whole, it is an assemblage of old videos that show the preparation of the attacks on the twin tower. It’s a nice trailer of the next video released on September 10th. Such strategy would not be surprising: the quality of As-Sahab’s videos indicates that they are produced with modern equipment,  by competent technicians. In particular, the promotion of their communication have improved, often with the aid –voluntary or not- of the Western media system that are willing to spread breaking news focused on al-Quaeda. 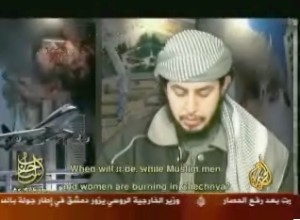 On September 10th  as-Sahab, the terrorist group’s multimedia production organization, released a two-part, 90-minute documentary titled, “Knowledge is for Acting Upon”. The video, subtitled in English, is designed to be an educational piece reviewing al-Qaeda’s grievances with the world, such as the establishment of Israel, the presence of U.S. troops in Saudi Arabia and the Middle East, and the war in Iraq. The video was distributed from about 450 links on the web in two files of about 950Mb of high quality .avi,   or from 60 links in medium quality  .rm and .3gp

While the overall production looks like a combination of an action movie montage from 1980s and an instant documentary as CNN or BBC, the language used by the Osama and Zawahiri is drenched in poetical imagery, religious quotes and metaphores. The video also features the wills of two 9/11 hijackers, Hamza al-Ghamdi and Wa’el al-Shihri. The documentary argues that the Zionist-Crusader alliance, led by America, is attempting to implement a militant colonialism on the Middle East. Throughout the documentary is old footage of prominent al-Qaeda individuals, including Osama bin Laden, Ayman al-Zawahiri, and Abdallah Azzam. The documentary is narrated by an unnamed individual who leades the spectators – that are part of the video – watching images from Tv or PC.

On September 10th  as-Sahab issued a one hour sixteen minute video interview conducted by the group, with Dr. Ayman al-Zawahiri. The video, titled: “Hot Issues,” concerns events and issues of salience to the Muslim Nation and Western peoples, and features al-Qaida’s number two dressed in white and seated in front of bookshelves of books. The video appears to have been recorded recently, with references to Israel’s bombardment of Lebanon and the kidnapping of Israeli soldiers by Palestinian militants in Gaza and by Lebanon’s Hezbollah guerrillas. The video is more technically sophisticated than previous ones released by al Qaeda’s fugitive leadership and is subtitled in English, with a short section of highlights at the outset. An interviewer asks al-Zawahiri a series of questions.

The topics covered during the course of the interview range from jihad in Iraq and Afghanistan, the recent conflict between Lebanon and Israel, Muslims who collaborate with Western governments, the denial of leaders of the Egyptian Islamic Group (al-Gama’a al-Islamiya) about the joining of an “important section” of the group with al-Qaida, in addition to the Salafist Group for Call and Combat (GSPC) in Algeria joining al-Qaida. Zawahiri also reiterates words made by Usama bin Laden regarding jihad in Somalia, calling upon the Muslim Somali people to “reject the American Crusader presence in Somalia to strike with strength America’s underlings in Somalia, and to see help from Allah”. He also castigates Western political leaders, specifically U.S. President George W. Bush and British Prime Minister Tony Blair for not accepting bin Laden’s truce and causing their people to reap the “disaster” which will shock them.

To summarize, “the American” is part of the recent development of the terrorists communication strategy. The latter provides:

To confirm that the fight which has been conducted through the media is the most important and effective, I would stress the impact on men grown up and camouflaged in the West. The London bombings occurred on July 7th 2005 strengthen the previous statement. All the bombers in fact grew up in the UK and attended British schools. The video released on 7th Sept. has the same goal –even if it’s an assemblage of old materials and wide celebrated oriented- and reinforce the already stated trends. Therefor, in addiction to the English subtitles and the Azzam the American, there are also Osama’s brothers in Afghanistan; recallings of jihadist past successes but also potential threats because some faces cannot be identified; examples of intense physical exercises and martial arts training. I do believe that on 7th  Western media placed an alarming amount of attention on a jihadist video that is not particularly interested, but it is still dangerous in terms of propaganda and recruitment.

The responsibilities of the Western media is call into question. Often the broadcasted  videos are  neither new nor interesting (the one of September 7th and 10th  are a perfect example). There are no specific references or potential clues concerning real threats. More likely they are a low cost and quite rudimental video. But, for example, the one of Seven has been announced in the morning on the radio and the news has been spread  everywhere just because Osama and his brother can be watched on tv. We have to bear in mind that Osama, even if he has become a “media star”, he is also a terrorist and an enemy of the West.  If the Western media don’t assume the responsibility of fighting terrorism, they will be unconscious allies of our enemies. That is what exactly As Sahab is looking for!