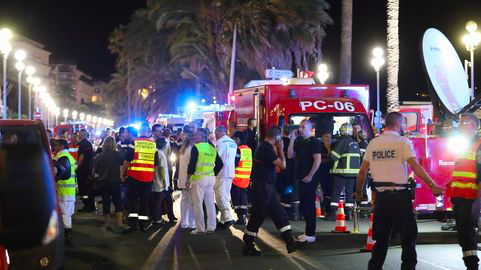 Bastil Day in France has been marred yesterday night by a deadly attack that has resulted in people getting killed and injured. The numbers of victims continuously rise as this short first commentary is written. A truck crushed into crowds that were out gathered for the celebrations and the driver has been shot dead by the authorities.

We do not know yet who exactly and under what organizational umbrella perpetrated this attack and even if it is a terrorist one for sure. But as more feedback by the media appears to support the version that a terrorist hit took place, we should consider the following:

Is this way of terrorist attack something new? No, not at all. Actually using vehicles to run into pedestrians and kill them is a method already used for some time now, for example against Israelis. What is alarming is that we see more and more attack methodologies from the Middle East been used in European soil. Additionally, the operational methods that are adopted are very simple and of primitive nature. Whether we are talking about knives (stabbing attacks), or trucks running down people, both require minimum preparation and no special skills. This makes them ideal for “lone wolves”. If we were considering the Israeli security case, a truck or a car with Israeli license plates (so that the vehicle can move in Israeli streets) and the entrance of the perpetrators through the borders inside Israel, both could be posing some difficulty for the organizers of the attack, thus giving to authorities a chance to act well in advance and prevent the plan. But the same problems do not appear in the case of such an attack in European countries. Anyone who is inside France can rent a vehicle or drive his own car and start crushing into people. So from the point of view of counter or preventive measures little can be done practically by authorities. Once more law- enforcement agencies have to be alert way before the plan starts to materialize in order to be really effective. Intelligence proves to be vital and irreplaceable for security.

We should take also into account the timing of the attack and its meaning. The celebration of the Bastil Day is very symbolic for France. National celebrations are held because the day marks an important event of the French Revolution which is focal for the French civilization and the French state. Many liberties and values in contemporary France, but also in the rest of Europe, are considered to be the outcome of the French Revolution. Should the perpetrators of this operation prove to be members of the Islamist network that has targeted Paris and Brussels, it is clear that these liberties and values are what they are against. So the choice of the date was perfect, as well as the location, a French place famous as a vacation choice, where locals and tourists enjoy summer in a free and relaxing way (and jihadists oppose the ways Europeans are enjoying life as immoral).

Nevertheless, contemplating about France as the target of Islamist violent campaigns today cannot evade thoughts regarding the country’s general policy in various levels. We must think carefully- among others- whether there is connection between the phenomenon of terror and the policy of France towards religion as well as the colonial relationship between France and Muslim populations[1]. Of course no one accuses France for the attacks or can link them directly to specific causes. The responsibility behind the evil of terrorism lies in the hands of the terrorists alone. Yet, we should see several parameters behind the fertile ground for radicalization that is paving the way for extremists. We have to understand the roadmap of extremism in order to intervene successfully and stop the pathway to terror. This is a challenge for the French and all the rest of us Europeans in order to answer adequately to the terrorist threat that is present.