Whether we should be worried about the nexus between climatic and environmental changes and human security should no longer be up for discussion. Nonetheless, we should have transformed this awareness into operational and policy solutions long ago.

At the present time, with the international community standing the laden of a modern political order built on the Westphalian and Wilsonian peace [1], the unforeseen rise in hybrid conflicts [2] during the past decades seemingly had disrupted any perception of foreseeable peace. At the same time, a series of Black Swans [3] had left us on the verge of a sharp turn from a 73% decrease in civil war (1990-2003) to a 125% increase in armed conflict within countries (2010-2017) [4], while many of the grievances and vulnerabilities behind these events could lie within the impact of climatic and environmental changes on our society.

The question “could climate change lead to conflicts?” is per se misleading, and its answer has been bound by theories which resemble the mythological “Procrustes Bed” [5], a series of paradigms seemingly built to explain a unique case study and forcedly adapted to similar scenarios.
As result, climate security has long remained a niche divided on the definitional conundrum of “climate induced conflict” and united be its adherence to the correlation between climatic variables and violence [6], leaving a vacuum on “how”, rather than “if”, human security is threaten by a changing climate.

In order to answer to this question, the article dives into the “Environmental Milieu”, described as the complex and reciprocal interaction of human, environmental and climatic factors within a specific scenario and its influence on selected intervening variables. Based on an internationally awarded research [7], the analysis presents the “Anthropogenic Climate Change and Human Security Approach”, a systemic risk model built to define thresholds and geophysical hotspots for climate induced vulnerabilities. While space limitations will not allow an in depth analysis, which will be presented in the following publications, it will provide an operational insight in the field of climate and environmental security and why its acquiescence could be the link between advocating and implementing effective climatic policies.

Civilizations do not arise nor demise in a vacuum, rather they are the outcome of a complex interaction within a specific Milieu, a unique mixture of socio-economic and geopolitical variables characterized by geographical, temporary and societal dimensions.

The influence of climatic and environmental changes on these dimensions is known as climate security. It begun as academic activity at the Harvard Department of History in 1979 [8], an attempt to study the nexus between profound and long term climatic oscillations and the demise of secular empires of the Late Holocene, as the Akkadian (4.200 BP), Classic Maya (1200 BP), the Mochica (1500 BP) and Tiwanaku (1000 BO) [9]. A decade later, in 1987, the release of the UN Brundtland report, formally known as “Our Common Future”, set frothed the genesis of the climate security genre.

Limited in scope as academic practice and heavily influenced by existing theories in humanities, this niche soon turned out to be “mainly inconsistent, not limited to methodological weaknesses and theoretical analytical shortcomings, but rather to the fundamentally flawless of the theory of environmentally induced conflicts itself.”[10]. Seldom sufficient to explain more than an handful of cases, the concept of climate security was built on two parallel yet antagonistic ideas:
first, the Resource Centric Approach (RSA), based on the social psychology theories of “Realistic Conflicts” [11], “Relative Deprivation” [12] and the “Gaussian Law” [13]; second, the Extreme Weather Events Approach (EWEA). Respectively, climate security was understood as the outcome of a social process based on the perception rather than ef­fective scarcity of natural resources, or via the risk of major societal di­sruption from weather and climate extreme events such as droughts, floods, heat waves and wildfires. While both currents were supported by representative quantitative and qualitative studies, their limitations and nature of academic exercise reduced the relevancy of climate security to strategic and tactical operational concerns within the military community, as proven by a report released by the US Center for Naval Analysis in 2007 [14].

On October 13th, 2014 the Pentagon’s “National Security Implications of Climate-Related Risk and Changing Climate” report turned the tables of the climate security field.
Uncommonly, a government institution univocally defined climate change as “threat multiplier” for terrorism, infectious disease, global poverty and food shortages [15], providing a first example of a cohesive model for climate induced insecurity. In spite of the limitations of its results, the report led to a renewed interest on the topic, followed by the release of innovative studies as the German Federal Foreign Office (FFO-Auswaertiges) “Insurgency, Terrorism and Organised Crime in Warming Climates” [16], the INTERPOL-UNEP strategic report on “Environment, Peace and Security: a Convergence of Threats” [17], and the RAND Corp. “NATO climate Change and International Security” dissertation [18].

Notwithstanding the prompt interest in the climate security field and the renewed trust in previously established correlations between severe climatic changes and trends in violence, or the deep roots between interstate conflicts and natural resources [19] and its connection with terrorism [20], the revolutionary result of the Pentagon’s report was to bring these nexuses outside a niche, rather than solve their conundrums and methodological limitations.

In order to answer to this question, the Anthropogenic Approach was developed in 2017 as operational and policy tool to prevent Black Swans in the field of climate security. Based on the concept of global hazards [21] and damages function [22] in a post-modern Risk Society [23], the models was built to identify geophysical hotspots and security thresholds.

Differently from pre-existing theories, it is based on a holistic approach to climate security and the central role of the human variable as agent of change, from which it takes its peculiar name.

“Anthropogenic Climate Change refers to any direct and indirect influence by the human species on the state of the climate and the environment leading or contributing to changes in the mean and/or variability and availability of its properties for an extent period within the ecosystem.”

With human societies thriving in the frame of climatic and environmental changes which are no longer defined exclusively by long term and time driven alterations, the Anthropogenic Approach analyses the mutual active and passive influence of three leading variables, human and climate.
At the same time, it accounts for their influence of five specific intervening variables, respectively: the presence of areas of limited statehood (ALSs) [24], endemic violence [25], uneven development, population growth [26] and migratory patterns. By doing so, it defines specific security thresholds and geographical hotspots which could outburst in three different forms of organized violence: State based armed conflicts, Non-State conflicts and One-sided conflicts [27]. 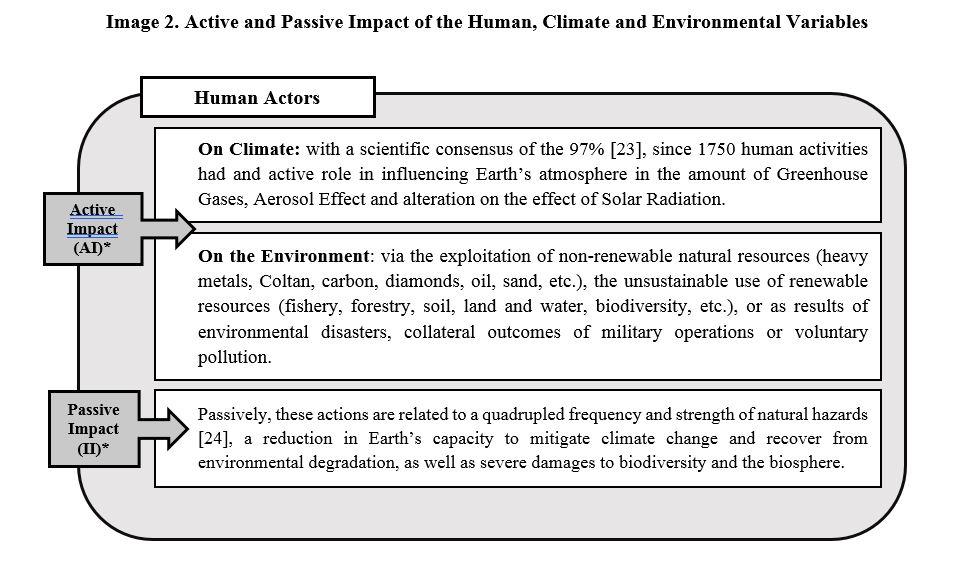 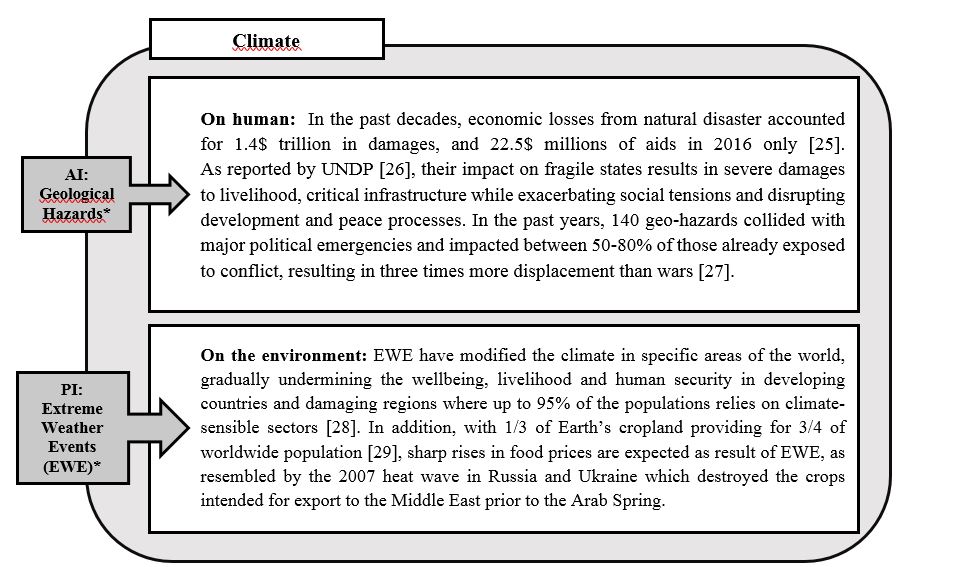 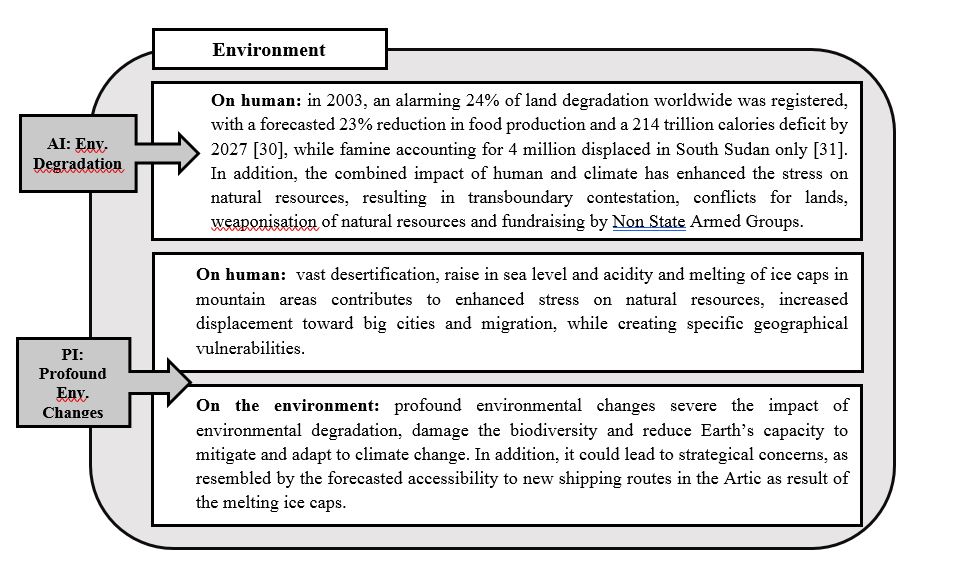 A long way ahead

While space limitations do not allow for a case study, the analysis of the constituent variables of the model exemplifies several ties between climatic and environmental changes and human security, opening to future studies and analysis.

In conclusion, climate security is a dynamic yet contradictory picture of progress and challenges in understanding “how” and “why”, rather than “if”[35], we should start addressing anthropogenic climate change (ACC) as a major threat to post-modern Risk Society. As previously posited, the feedback loops described by the model results in consequences of consequence, and the links between climate, fragility and conflicts are far from been linear. At the same time, as threat multiplier, ACC interacts and converges with existing risks and pressures, afflicting the poorest the most, reducing government’s strength and offering Non State Armed Groups opportunities to rise and prosper [36].

According to the UNDP, humanitarian and development assistance to fragile and conflict-affected states has been facing an increased demand, while it appears clearer and clearer how life-saving intervention alone are no longer sufficient to meet the needs and mitigate the risks.
As described by Bruker and Miguel in 2013, the existing body of research on climate security has successfully established a correlation between climatic events, conflict, political violence and terrorism. As result, with existing models addressing how this correlation unfolds on the field, it is time for policy makers to bring climate security on the table of National Security Strategies and align it with hybrid and cyber warfare among the future security trends.