info@itstime.it
ITSTIME > Terrorism > Al-Muhajiroun in UK: From the case of Abu Muwahhid to a network perspective – by Alexis Fawkes

In the last weeks the chief investigative reporter of the Sunday Times, Dipesh Gadher, has shown[1] that a notorious British extremist has spread different messages throughout the social networks in order to support some hate preachers and defend his religious views. The event around the British extremist called Shah Jalal Hussain and also known as Abu Muwahhid, once again focuses attention on the al-Muhajiroun movement in UK. 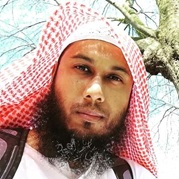 Abu Muwahhid is well-known as an Islamic activist-preacher and for his extremist views reported during several speeches in the last 15 years.  As reported in a previous deep analysis, intitled “Al-Muhajiroun network in UK. Cross analysis between open source and video intelligence analysis”[2], Abu Muwahhid attended as a spokesman in several public dawah organized by different radical and banned group in UK which are all linked to the al-Muhajiroun movement. Already in 2011, Abu Muwahhid acted as a spokesman in a radical group called “Muslim Against Crusaders (MAC)” and he was very closed to other notorious radical activists and preachers. As shown in the figure 2, on January 2011, Abu Muwahhid was in a protest rally organized by MAC group for the detention of Abu Hamza al-Masri (terrorist associated with al-Qaeda and convicted by US). Among them, other relevant key-members of al-Muhajiroun network participated to the protest rally such as, Minazur Rahman (a.k.a. Abu Baraa), Ricardo McFarlane (a.k.a Abdul Hakeem), Abu Assad Ullah, Anthony Small (a.k.a. Abdul Haqq), Abdullah Deen, Abu Waleed, Richard Dart, Abu Rayah, Abu Muaz and most of all Anjem Choudary the notorious leader and British hate preacher in UK currently in prison.

All of them faced with the justice for terror-related offences, specifically, Abu Muwahhid was arrested as well in 2008 and he was found guilty of fundraising for Iraqi fighters within and around the London Central Mosque at Regent’s Park with other al-Muhajiroun’s member (Omar Brooks, Abdul Saleem, Simon Keeler, Ibrahim Hassan, Abdel Muhid)[3] [4] . After his released, Muwahhid continued to do extremist talks, lectures during Islamic conferences and on the web too, thus he was arrested and convicted again in June 2013 with Ibrahim Hassan (a.k.a. Abu Nusaybah, a friend of one of the attackers of Lee Rigby). He was released from jail halfway through his sentence in 2015[5]. 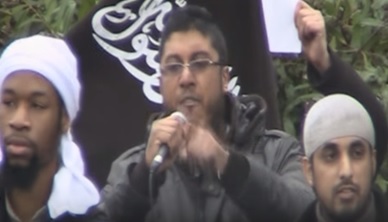 It can be certainly affirmed that the Abu Muwahhid is connect to an extremist consideration of the Islam, as evidenced by its “biography”. In relation to the last case about him, he has endorsed on his social networks extremist preachers such as: Ali al-Tamimi, Ahmad Musa Jibril, Nabil al-Awadi e Musa al-Qarni. All of them have been convicted for terrorism related offences, thus connection and support of terrorist networks.

Abu Muwahhid has tried to publicly explain his position using a victimization narrative on his Twitter profile keeping attention on the torture and inhumane conditions of detention of muslims[6].

Figure 3. Extract from the announcement of Abu Muwahhid on Twitter

From a network perspective, this case cannot be underestimated because it helps to understand the strength of the extremist networks. In spite of continuous pressure by authorities, al-Muhajiroun network continues to be resilient and active. The resilience of the network permits to affirm that is hardly to neutralize an extremist network due to a side effect that can be called “contagion effect”.  An extremist network, such as al-Muhajiroun, mainly works exercising a control of hearts and minds through jihadi preaching, in fact the main leaders usually do not have any direct connection to terrorist operations.  In this framework convicted extremists are generally released after just few years from the imprisonment in relation to the nature of their committed offences. After that, an extremist activist continues to exercise the jihad preaching switching from a high to a low profile. This low-profile mode remains a sort of preaching that operates waiting for the reinforcement of the network and having an impact on the weak ties around the actor (contagion effect). In this way, the network structure during the years became more decentralize with the creation of sub-groups (and others sub-movements) which continue to be active.

During the activity of preaching of Anjem Choudary (and other relevant members) the al-Muhajiroun movement was very strength and supported by a lot of actors (it works around a centralized structure).

After that, the network become weaker because of the gradual imprisonment of several members, however without a concrete disruption. Indeed, when a central actor collapses other nodes (especially weak ties around central actors) emerge to bridge the gap in order to maintain the vitality of the system. A good example is the case of Ricardo McFarlane (a.k.a Abdul Hakeem) who during the years has become more visible in the al-Muhajiroun group by passing from a simple associate to a spokesman of the movement filling the network gap after the pressure of the authorities (network resilience → network survival). At the same time, he has continued to preach and radicalize people with the creation of a sub-group (contagion effect →   network expansion), for instance, under the name of “ListenIslamUK” in 2017. Moreover, he was in contact with Khuram Butt, the mastermind of the London Bridge terrorist attack carried out on 3 June, 2017.

Figure 4. Frame of the Channel 4 Documentary “The Jihadist Next Door”. Ricardo McFarlane with Khuram Butt and other extremist activists.

In this way, the general effect of the network is just weaker than the past and the network structure is more decentralized. This framework has been clearly shown by Kenney, Coulthart and Wright (2016, 2228 – 2229) reporting that:

«Following the application of state pressure, al-Muhajiroun evolved from a centralized [scale-free-like] network to a more decentralized, [small-world-like system]. This small-world structure offers an organizational “solution” to the activist network’s collective action needs through two mechanisms. First, the small-world configuration provides multiple bridges between clusters that allow information and other resources to spread throughout the network, even when leading activists are removed from the system. Second, local clusters in the form of halaqahs allow activists to interact frequently, coordinate their activities, and recruit new members to replace participants who are removed due to government pressure.»[7]

To conclude, the al-Muhajiroun extremist movement in UK is resilient for the capacity to protect itself when it is under attack becoming more decentralize and for the availability of a large number of activists who permit to ensure the group continuity in various forms. This statement is also demonstrated by the sequence of the different al-Muhajiroun’s movements shape during the last 15 years (al-Muhajiroun, al-Ghurabaa, Islam4Uk, Call to Submission, Islamic Path, London School of Sharia, Muslims Against Crusades, Call to Islam Movement, Discover Islam, The Need for Khilafa, The Saved Sect[8], Islamic Roadshow, Islam is Superior, Listen Islam UK). As stated before, the release of the convicted members of al-Muhajiroun can increase the robustness of the network becoming more effective. For example, specific attention should be placed on Anjem Choudary, a former key player of the al-Muhajiroun who radicalized a lot of people with his extremist preaching, some of them involved in terrorist operations. Anjem Choudary will be probably released at the end of the year[9].

(English version can be requested)

[9] Rory Tingle and Alex Ward (2017). Hate preacher Anjem Choudary – who is accused of grooming London Bridge terrorists – will be free by end of next year. The Daily Mail Online. https://www.dailymail.co.uk/news/article-4579216/Anjem-Choudary-free-end-year.html