info@itstime.it
ITSTIME > Terrorism > Has the military to be considered the next “soft target” of opportunity? – by Emilio Palmieri 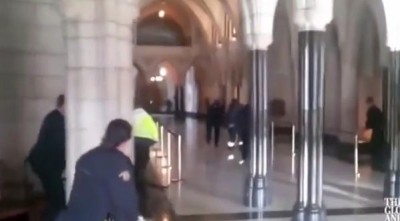 The recent Ottawa attack, where an active duty soldier was shot dead by a would-be “militant jihadist”, has brought to light an emerging targeting paradigm that is worth being addressed: has the military garrisoned in Western barracks been a suitable target by violent extremist networks in recent years? In other words, could it be considered a new objective of opportunity within the category “soft-target”?

The apparent paradox is staggering given that traditionally the military – amongst national instruments of power (Diplomacy, Information, Military and Economy) – has always been the most defended and guarded asset. One first insight into this could be that garrisons based in Western countries are, for the most part, routinely protected and then less heavily defended: this differs significantly from a more solid posture taken by personnel and facilities in combat zones. With this regard, the latter can be designated as “hard-targets”, although there is plenty of instances where, despite relevant force protection measures, the enemy has hit considerably anyway.

The following are significant activities relating to the topic under scrutiny: they serve not only as a time-event list, but also as geographical and tactical indicators useful to appreciate how spread and articulated the phenomenon is.

12 October 2009: a Libyan citizen named Mohamed Game attacked an Italian Army barracks in Milan with an improvised explosive device that seriously injured himself and lightly a soldier who managed to stop the Libyan at the main entrance.

11 March 2012: Master Sergeant Imad Ibn-Ziaten, an off-duty paratrooper in the 1st Parachute Logistics Regiment was shot in the head at point-blank range outside a gym in Toulouse.

15 March 2012: two uniformed soldiers from the 17th Parachute Engineer Regiment were shot and killed and a third was seriously injured outside a shopping centre in Montalba: the author of this and the previous event was identified as Mohammed Merah, a 23-year-old French petty criminal, of Algerian descent who converted to virulent extremism while in prison.

25 May 2013: 21 years old Alexandre Dhaussy, a recent Christian convert to Islam, attacked and stabbed the French soldier Cédric Cordier in the Paris suburb of “La Defense”.

2 March 2011: an immigrant from Kosovo fired upon an United States Air Force bus, killing two and wounding two. At the time of the attack the vehicle was parked outside the terminal building waiting to transport 15 U.S. airmen to Ramstein Air Base.

22 May 2013: Michael Adebolajo and Michael Adebowale used knives and a cleaver to stab and hack to death a British Army soldier, Fusilier Drummer Lee Rigby, near the Royal Artillery Barracks in Woolwich, southeast London.

5 November 2009: Nidal Malik Hasan, a U.S. Army major and psychiatrist, fatally shot 13 soldiers and injured more than 30 others at a military base in Fort Hood, Texas.

20 October 2014: Martin Couture-Rouleau run over and killed one soldier and fatally injures another one in Saint-Jean-sur-Richelieu before being killed.

22 October 2014: Michael Zehaf-Bibeau fatally shot one soldier, and injures 3 other people before being killed in an attempt to enter the Parliament Hill in Ottawa.

There are several indicators that can be isolated and analyzed with regards to the above listed significant events.

The operational environment that militant extremists operate in is represented by Western urban settings. The environment allows them to maneuver taking advantage of the relative freedom of movement and the anonymousness. An infiltration movement can be successfully executed given that large migrants communities usually settle in cluster areas in big cities like London or Milan. In this way, the operation can be feasible and sustainable. On the other hand, if the actor is a local convert, he can exploit his knowledge of the terrain, the local populace and patterns of emergency reactions by law enforcement agencies: it is basically “urban terrorism”.

The targeting process is aimed at striking against target of opportunity or interest. It is usually basic and limited to choosing the right time to hit. One significant variable could be the suicide factor: if the agent is willing to sacrifice himself as a consequence of the attack, a more dedicated process could be applied in order to maximize effects and reduce mission failure risks.

Violent extremists are used to employing terrorist tactics: as the abovementioned significant events clearly show, they are able to approach the target and accomplish the mission by assassinating selected objectives using close combat techniques (knives, guns).

As for operational procedures, an intelligence pattern of a sort seems to be working: a pre-attack surveillance is usually carried out in order to find and fix the target to attack; then the finishing part usually follows the close combat approach described earlier. However, very rapid and previously unchecked objectives are being targeted by militants, as the 22 May 2013 event in London demonstrates.

Finally, opposing networks are increasingly keen to employ primarily converts or second/third generations of migrants from the targeted country. Several pros apply: they know better the environment, they can better be blended into the local populace, they have contacts of interest. Nonetheless, a cons could be that, being converts, they might be under national security structures’ radars, in so doing seriously endangering mission success. A second “weapon of choice” could be militants tasked with getting to the selected country, acting as migrants who make their living and enjoy their life (with drugs, alcohol, prostitutes, disco) in order not to raise suspicions and then exploiting the freedom of movement needed to accomplish the mission. When they act this way, those kinds of militants are called Takfirin and they are the most dangerous ones because of their covert and deceptive posture.

With regard to plausible and foreseeable lines of operation:

The attacks that have been executed over the recent years against military personnel are being driven by a religious motivation fused with a psychological approach: hit the nerves (human component) of the military system of those countries involved in combat campaigns against Islam in the dar al-Isalm (the territories of Islam) by waging an insidious, limited and religiously due warfare carried out in their own Western-civilized urban settings defined dar al-harb (land of war).

There might be nothing new about the so called “lone wolves” phenomenon. During the ‘90s, the well known Syrian strategist Abu Musaab al-Suri had clearly stated the principle labeled “nizam la tanzim”: “system, not organization” which meant that if the global salafi jihadis movement wanted to hit the enemy, they should be acting by way of small cells or even lone actors, well established in the Western targeted society, in so doing limiting the odds of being subject to counteractions by security organizations.

On the tactical side, a recent statement posted by ISIS spokesman Abu Mohammad al-Adnani and entitled “Indeed Your Lord Is Ever Watchful” has stressed the importance of “Strike(ing) the soldiers, patrons, and troops of the tawāghīt (Rulers ruling by manmade law)… Kill the disbeliever whether he is civilian or military, for they have the same ruling … If you are not able to find an IED or a bullet, then single out the disbelieving American, Frenchman, or any of their allies. Smash his head with a rock, or slaughter him with a knife, or run him over with your car, or throw him down from a high place, or choke him or poison him”: a clear tactical guidance that has been recently followed by ISIS-inspired allegedly lone actors in the abovementioned events in Canada.

The events highlighted herein clearly show that, on the human side, the present phase of the assault currently being carried out by violent extremist network in the West against military personnel is basically an open-source warfare. The model postulates that violent extremist networks use an open-source community approach to tap into in order to wage a warfare that is agile, adaptive and innovative: Internet-based social media are the center of gravity that empower networks to spot, radicalize and direct the smartest conceivable weapon (an ideologically-motivated violent individual) against a designated target (in this case military personnel garrisoned in Western bases). As for these types of agents, we have been facing two kinds of competing militants: ideologically-oriented lone actors vs. network-driven lone actors. The former are individuals that have autonomously and locally passed through the phases of the (cyber)homegrown radicalization-jihadization process without connections and links with representatives of militant organizations (the examples of Michael Zehaf-Bibeau in Ottawa or Michael Adebolajo and Michael Adebowale in London speak for themselves); the latter are individuals who have had contacts with representatives of extremist networks, who might have had combat or training experiences and who are ordered to act on Western soil against targets of opportunity (the case of Major Nidal Malik Hasan at Fort Hood is exemplary).

The current emerging pattern of violence has been an indicator of the evolution and adaptation that has significantly emerged over the recent few years. Especially in Western countries, where on the part of violent extremists frictions hampering mission success are numerous (issues relating to financing, logistics, recruitments, suitable targets, saturation of domestic security structures and so on), a general shift towards less complex operations can be appreciated. The following can be considered likely attributes of the contemporary irregular warfare that is presently being waged in Western countries by empowered lone actors inspired by or organic to violent extremist networks: small scale attacks, hyper-radicalized individuals, light operational footprint, focused effort against military target of opportunity, propaganda exploitation. This manifestation of the current low profile engagement as emphasized in the article is going to be fought on our streets and against our men and women in uniform: we need to be watching and studying the evolution of the violent paradigm in order to set the proper conditions to address, anticipate and counter the operational problem.