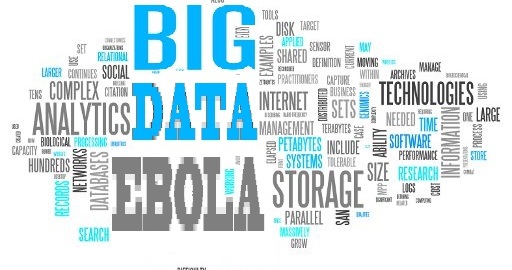 While diseases have historically received a significant amount of attention from the global public health community through the development of impressive surveillance systems, it seems challenging to assess whether big data really make a difference in real-time responses to pandemics.

Leetaru [1] points out that “The first public international warning of the impending epidemic [ebola] came not from data mining or social media, but through more traditional channels”. In this specific case, the traditional channel was a news article written in French that reported on a conference held by the Director of the Division of Disease Prevention in the Guinea Department of Health broadcasted on… television! As Leetaru emphasises, the Harvard’s HealthMap [2] did not pick up from the social media, but from the mainstream media. Believe it or not, the telly still exists!

Surprisingly enough, the news was in French AND the TV played a crucial role. It sounds like an old dis-connected world, doesn’t it? A world where the Western “rules” don’t really fit in and where English imperialism is shadowed by other native languages which are less monitored and/or translated. The fact that Ebola started spreading from suburban, remote or isolated areas that are characterized by particular cultural biases and that have a different approach to the use of Social media compared to big cities as well as the nature of the pandemic in question, which strongly brings within itself the “dreadful factor” [3], have surely contributed to give birth to this “weird” phenomenon.

However, what could be seen as a drastic inversion stands as a monitor for a needed increase of the level of attention to social aspects when turning theoretical technology application into practice. Leetaru calls both for more local data and more global attention to local communities and rightly touches upon cost-benefit analysis which are, more often than not, completely missing in the public debates. The proliferation of social media, big data and data mining does not always guarantee real-time effective responses. The complexity of reality is hardly captured by sophisticated surveillance systems, let alone interpreted. Watching and monitoring real-time does not always entail effective decision-making.

Understanding the present moment through big data is undoubtedly important but the “collected-everything approach”[4] does have limits and raises privacy and civil liberties concerns. Echoing Andrejevic and Gates (note 4) the question is: if predictive technologies are so sophisticated, why, for instance, terrorist plots are not detected in advance? The same holds true for responses to pandemics. Is big data-driven surveillance enough to deal with pandemics? How about cost-benefit analysis? And, more importantly, who benefits from surveillance systems?