info@itstime.it
ITSTIME > Communication > Can the bird catch the worm? – by Alessandro Burato 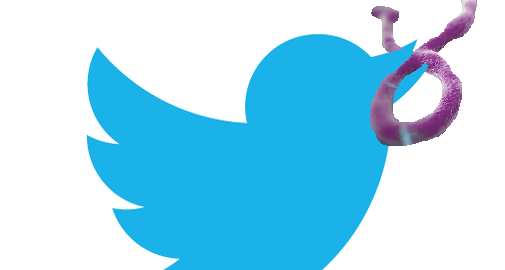 Ebola is still spreading although it is no more interesting for media as few weeks ago. The last released WHO report counts for 3,341 confirmed cases among Guinea, Liberia, Sierra Leone and Senegal and a total of 1,687 deaths [1]. The web is getting overcrowded with different projections of the virus diffusion based on now proved models that however are drawing not always a coherent picture: several variables, such as time, confirmed, probable or suspected cases, official or un-official data are responsible for a variety of estimations and worst-case scenarios.

So, within a couple of days close to 10,000 infections were expected [2], a worst-case scenario elaborated by the U.S. Centers for Disease Control and Prevention estimates that by the end of January there could be 550,000 or more cases of infection and the WHO and the WHO prevision of 20,000 cases before the pandemic could be contained have been retracted by the organization spokesman [3].

Undoubtedly, all of those variables are characterized by a huge amount of data, which have to be gathered, analyzed and synthesized in order to make sense of them and thus allow decision makers to have the clearest picture of the broad situation to act accordingly. It is now acknowledged that since a crisis, of whatever kind and origin, whether it is natural or man-made, constitutes a part of people’s lives, it is not usually let off the use of social media, which have penetrated every aspect of our experiences.

So normally the available data also massively come from this new way of exchanging communications following two different paths: information seeking and producing. In times of emergency, the public interest and the seeking of information related to the event in question raise exponentially in order to keep our cognitive system in balance: the situation, made dissonant by the crisis itself, is characterized by the individual need to reduce a psychological awkwardness by defining the changed framework through the information seeking process [4]. On the other side, the public, precisely thanks to the use of social media, has become one of the most important (in terms of amount of produced data and their immediacy) source of information production. New technological devices provide people with the immediate possibility to share almost every kind of content: text, photos, videos and links [5]. This operation, which is as just simple as clicking “send” on a smartphone, besides turning the perspective on risk management upside down as people involved in an emergency are not just affected individuals who need care but also first actors directly involved in every part of the crisis management cycle, poses great challenges to the implementation of all the already available information with these new data in order to enhance situational awareness [6].

This kind of analysis have been always more constantly used in relation to natural disasters [7,8,9]. Now, the question is: is it possible to use micro-blogging website, such as Twitter for example, to monitor Ebola or more generally in relation to a pandemic? The answer is just maybe even though it has already been done. Started in 2009, a flu pandemic known as the swine flu, resulted in more than 1,500,000 confirmed cases and 14,000 deaths. A research has been done collecting about 160,000 tweets per day in the UK starting from 22/06/2009 to 06/12/2009 to look into them in order to early detect possible cases through the analysis of symptom-related statements and geolocate them to monitor the pandemic spread [10]. The produced data were in line with the official statistics provided by Health Protection Agency, demonstrating the potentiality of the system.

Thus Tweets mining has proved to be valid also for a pandemic but apparently no similar research or project have been done by now in relation to Ebola. As a matter of fact there are just two interesting ongoing activities that nevertheless do not imply at all or as a decisive source of information micro-blogging [11]. Firstly, Flowminder, a Swedish non profit organization, had the authorization to track cell-phone data so to have a model that could help in predicting people’s travel patterns and thus creating a map of places where preventive measures should be focused [12].

Secondly, Healthmap, following the enthusiasm raised by crowdmapping services in emergency is constantly updating a map on which a mixture of OSINT (Open Source INTelligence) and SOCMINT (SOCial Media INTelligence) is used to localize new and ongoing outbreaks and warnings [13].

Table 1: number of alerts for all diseases for each source 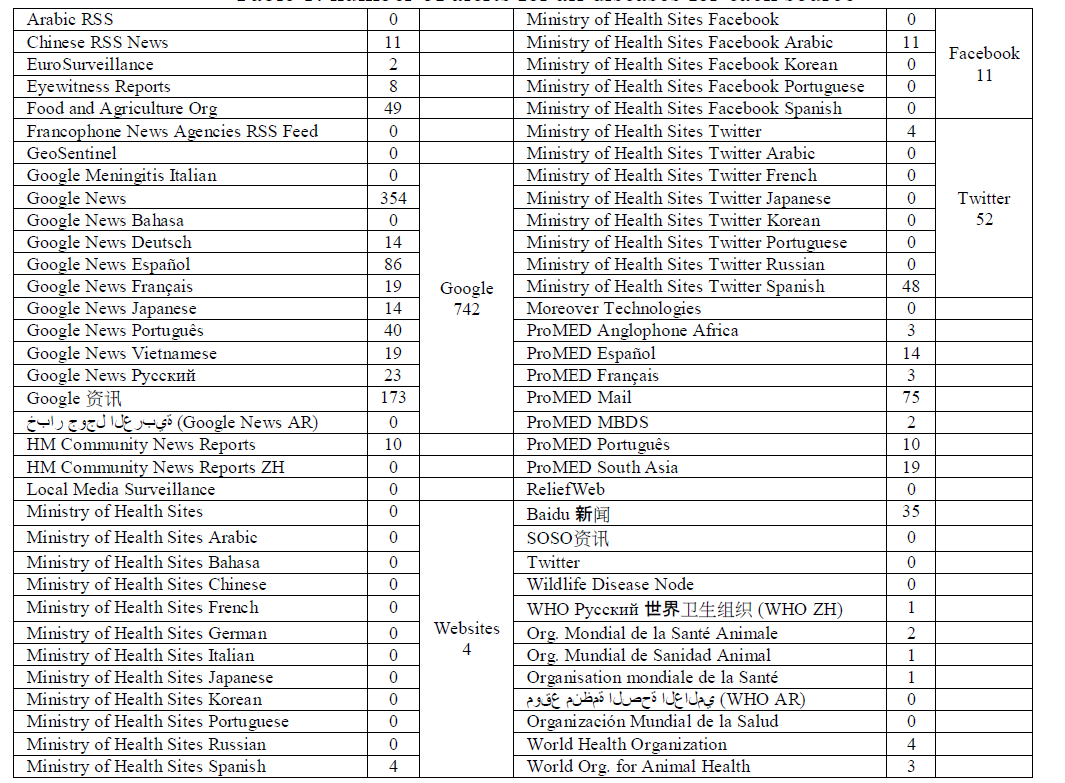 The analysis of online available information has a central role in the realization of the map: news indexed by Google from all over the word are about the 76% of the total number of alerts. On the other side, social media have a second-floor role to the extent that only institutional Twitter and Facebook profiles are considered among sources.

Thus, although in a previous article the role of Social Media as a tool to disseminate risk communication has been acknowledged as an important and possibly effective way of sharing information about preventive measure to contribute to reduce the virus spreading, the absence of a deep investigation on the use of micro-blogging websites and social networks by the public to provide a sort of early-detection of possible new cases needs to be further examined.

In this regard, there are at least three aspects that deserve to be highlighted and that will be briefly mentioned. In general, there is no doubt that having to deal with tweets or posts poses major problems about information reliability and how to use the gathered information practically. A wrong interpretation of a message could be responsible for the diversion of precious resources or fakers can intentionally and easily use those tools to disseminate false information.

Moreover, the real engagement and the kind of information shared with the social networks can sensibly vary in relation to cultural identities and attitudes, notwithstanding the fact that, although some of the affected regions have the highest number of users in the continent, the distribution of them between cities or suburbs, which is a relevant distinction for any evaluation on the issue in question, is not that clear to allow to have a sense of the use of those tools in the most exposed and potentially interested areas.

When it comes to Ebola in particular, there is another factor, already mentioned, that affect all the aspects related to the emergency and thus also the use of Twitter and Facebook for the purpose above referred: the illusion that the virus is not real. The awareness and surveillance over symptoms, in fact, which at least at the beginning are a-typical (fever, vomit, diarrhoea), can be inadequate and they can be easily underestimated or attributed to other illnesses.

However, the strongest brakes to the implementation of the available information thanks to the interpretation of micro-blogging messages and the main reasons why the bird seems to have hard time keeping up with the worm, are the nature of the emergency itself and its specificity. Pandemic means illness and presumably now nobody is willing to raise his/her hand to say “well, you know, today I’m not feeling very good. I think I’m coming down with flu”. More probable for a disease that has a mortality rate of 0,02%, as for the swine flu, which is even lower that the one of seasonal flu (0,2%), rather than for an untreatable infection as Ebola, that message could put an indelible stigma on you, cutting off all you social relationships. Who would be willing to risk to be isolated and banned from society, which still have a tight link to the community dimension, for a disease which is not even real?