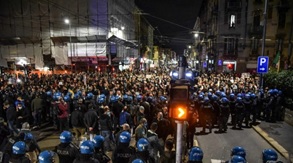 For some years now some international newspapers have been rethinking the ‘foreign news’ section according to a principle for which paying attention to the ‘other’ is like looking in the mirror, where both similarities and differences can speak of ‘us’. END_OF_DOCUMENT_TOKEN_TO_BE_REPLACED

Since 2015, legislative power in Poland has been held by Prawo i Sprawiedliwość (PiS – Law and Justice), a conservative political party. The political environment led by Jarosław Kaczyński has set its sights on reforming the State thoroughly, being at the same time the absolute opposite of its greatest rival – Platforma Obywatelska (PO – Civic Platform), a liberal political party. It is worth mentioning that both of the political parties stem from the same place – Solidarity movement of 1980s. However, disagreements between those two political powers have been determining Polish politics since 2005. END_OF_DOCUMENT_TOKEN_TO_BE_REPLACED