For some years now some international newspapers have been rethinking the ‘foreign news’ section according to a principle for which paying attention to the ‘other’ is like looking in the mirror, where both similarities and differences can speak of ‘us’. The opinion that is gaining ground is that ‘foreign news’ is now an obsolete category, which needs to be reorganized starting from the field of interest, not from the geographical place we are talking about. Five years ago, for example, Anna Momigliano observed that «a news on violence against women in India is an article about women, which incidentally takes up Indian facts». It is for this reason that, personally, when I read and write about other social systems, for example that of Burundi, I actually think that I deal primarily with democracy and emancipation, freedom of expression and information, the right to dissent and respect for the opposition, the construction of otherness and self-determination. In other words, these issues concern each of us, everywhere and in person.

However, sometimes ‘foreign news’ become ‘internal news’, indeed in some cases they become very ‘local news’. It happened to me at the beginning of June, when one morning, during my daily press review, I came across an article in the French weekly “Le Point” about a member of the Ku Klux Klan accused of running over protesters from the Black Lives Matter with his car. The subject has always interested me, both as an anti-racist citizen and as a scholar of cultural anthropology, but beyond the news itself, what really struck me was the photograph attached: a group of hooded people whose caption indicated as members of the Ku Klux Klan, the infamous racist and far-right organization in the United States. Actually it was an image of the catholic “Processione Bianca” (White Procession) that takes place on Good Friday in Sorrento, in the South of Italy, so I took action to report the error to the editorial staff.

That morning I wrote to “Le Point” via Twitter and my message was shared by many French and Italian friends. In the editorial staff of the weekly magazine they realized the mistake and in the evening they had updated the image, eliminating that of the Sorrentine Procession. They showed professionalism, because an error can happen and it is humanly understandable. I am not the proverbial schoolteacher with the red pen and I understand that in a hurry one can make a mistake. 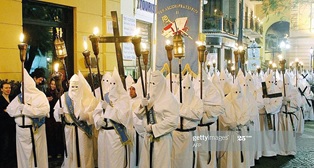 But, solved the problem, a new one of a similar nature was soon presented. A couple of friends from Sorrento wrote to me and one of them told me that he had searched for the image on a well-known search engine and had discovered that the source of the error was Getty Images, an American photographic agency that has one of the largest photographic archives in the world. There the photo of the White Procession had been indexed as a manifestation of the Ku Klux Klan and for this reason the editor of “Le Point”, in the frenzy of editorial work, made a mistake. So I also wrote to the photo agency to ask that the error be corrected. They also changed the description during the day.

The story was recounted in the “Corriere del Mezzogiorno” of 11 June by Fabrizio Geremicca, and here I just remember that mistakes can happen, especially in an information system as fast, dusty and interconnected as the one we find ourselves in, but the important thing – as the media involved have shown – is to demonstrate professionalism by listening to readers and intervening promptly when necessary[3].

Ku Klux Klan is the name used since the second half of the nineteenth century by various secret organizations in the United States of America, with political and terrorist aims and oriented by an openly racist ideology. In others words, the KKK is a recent ‘invention’ that in the first half of the twentieth century also had a few million members, while today they are estimated at a few thousand. They are reactionary movements nostalgic for slavery and apartheid, steeped in anti-Semitism and homophobia, nationalist extremists and the white suprematism that has shed so much blood in recent American history. So, for me, see the name of these terrorists juxtaposed with an image of the famous and intense Sorrentine Catholic procession is an infamous disgrace, so I am personally glad that it has been made clear with a certain speed. The White Procession organized for centuries by the Venerable Archconfraternity of Santa Monica is profound humanity, it is a bond between generations, it is pietas because being Incappucciati (Hooded) means crying together. Instead, the KKK is anonymity, it is cowardice, it is hatred and violence, it is contempt for the human being.

But this episode, as I was saying, for what happened in a French newspaper and related to an American news story, is a fitting example of how ‘foreign news’ no longer have any reason to be in the globalised world in which we live; whether we like it or not, it is ‘internal’ news, indeed with local reverberations. And it is news that, on the one hand, concerns the image of Sorrento, the decorum of its name and culture, but on the other hand it must lead us to reflect on the quality of journalism and information, but above all on the role played by each of us, readers, citizens and, each for his or her share, producers of news and diffusers of information. In other words, it means that we must be more careful, that we must feel the responsibility of being part of this interdependent system in which communication travels at instantaneous speed and which, if not properly verified, can build false news and lead to misunderstandings.

In the last twenty years communication has gained space, it has become more central than ever before; today we live with a pulviscular and omnipresent communication, yet even more fragile and delicate. We realised this very clearly during the most acute period of the Covid-19 pandemic, between uncertainty and approximation, instrumentalization and manipulation. Personally, I am working on it with two colleagues – Barbara Lucini and Maria Alvanou – as part of the research project “Viral violence” at Converge – University of Colorado. For the moment, the episode I reported in this article teaches us that communication is no longer a vertical issue, but a horizontal one; no longer linear, but stellar, so we are all involved because we are both producers and consumers of information. As we know from many examples of political propaganda in recent years, this misinformation, or bad-information, is at the root of great electoral fortunes: real “palaces of consensus” built on completely crooked foundations, yet firmly standing in the eyes of those who believed in the first distortions, if not promptly unmasked. People are not a mass of cheats and fools; they believe, and act according to what they believe. A collective awareness of the ‘active’ role that each of us can and must have is therefore necessary: we have better journalism if we are better readers; we have better politics if we are better informed voters.

[1] This article is part of preliminary empirical considerations that the author will use during the effort of the COVID-19 and Viral Violence Working Group (National Science Foundation funded Social Science Extreme Events Research-SSEER Network& CONVERGE/Natural Hazards Center at the University of Colorado Boulder, https://converge.colorado.edu/resources/covid-19/working-groups/issues-impacts-recovery/covid-19-and-viral-violence). This COVID-19 Working Group effort was supported by the National Science Foundation-funded Social Science Extreme Events Research (SSEER) network and the CONVERGE facility at the Natural Hazards Center at the University of Colorado Boulder (NSF Award #1841338). Any opinions, findings, and conclusions or recommendations expressed in this material are those of the authors and do not necessarily reflect the views of the NSF, SSEER, or CONVERGE.

[2] Giovanni Gugg, PhD, is adjunct professor of Urban Anthropology at the faculty of Engineering of the University of Naples “Federico II” (Italy). His research focuses on Anthropology of Risk and Anthropology of Landscape: his studies concern the relationship between human communities and their environment, especially when there are territories at risk. He is member of LAPCOS (Laboratoire d’Anthropologie et Psychologie Cognitives et Sociales, University of Nice, France) and he teaches in some Erasmus Mundus+ masters. Among his most recent publications: “Inquietudini vesuviane. Etnografa del fatalismo su un vulcano a rischio” (2020), “Disasters in popular cultures” (2019), “Anthropology of the Vesuvius Emergency Plan” (2019), “The Missing ex-voto. Anthropology and Approach to Devotional Practices during the 1631 Eruption of Vesuvius” (2018), “Vies magmatiques autour du Vésuve: voir et ne pas voir comme stratégie collective” (2017).