info@itstime.it
ITSTIME > Security > The Charlotte social unrest violence: Why islamist terrorism is not the sole security threat – By Maria Alvanou

Since the attack of September 11, the U.S. took the lead in the struggle against terrorism. They did so dealing with it in the context of “war against enemies of the nation”, so that american citizens are protected from “external” threats that challenge the security of the country. This line of response set standards (legal, military, and police) that affected counterterrorism strategy globally. Yet it is not terrorist attacks, but social unrest violence that has been challenging seriously and repeatedly the domestic security of the country. Killings of members of the African American community by the police, as well as more generally the phenomenon of police brutality in relation to racial prejudice[1] have been the background for serious protests, violent riots, even “revenge shootings”[2]. 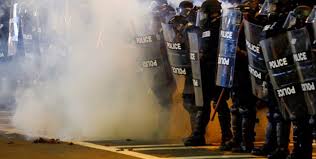 Recently the security situation after an alleged event of police brutality against an African American in Charlotte drove the Governor of North Carolina to declare state of emergency[3]. The above is indicative about how security threats should be evaluated and perceived by analysts and those who design security policies. No one can underestimate the danger a jihadist poses (regardless of acting individually, or been chosen by an islamist organization to act). Yet there are also other, very serious security threats that cannot be overlooked. While it remains to be proved and decided by justice whether the allegations in this certain case are true, what really counts (also in other similar past cases) is that serious violent social unrest erupted. Such a turmoil context affects the general security status of a country. Not only it engages and keeps in duty law enforcement personnel, but it can also be used as part of the rhetoric of jihadism as a sign and example of the degenerated and unjust West, where there is no equality of people and violence rules. Members of communities affected by injustice, who suffer and feel frustrated, who are part of a conflictl can be vulnerable and an easy prey for recruitment by islamist extremist groups. In a nutshell, social problems, trauma (individual and collective) and frustration pave the path to radicalization. If the allegations, on the other hand, in such cases are proven true, then the problem is even bigger. The values of the rule of law, equality, justice and abolition of discrimination are basic for the foundation of states in the West. It makes no sense trying to protect our culture and way of life from “outside” enemies and strangers, if these are threatened and annulled by the people who have the duty to safeguard them.

The above is not only a U.S. problem. There also cases in Europe where serious social unrest has endangered security. The events of December 2008 in Greece[4] (that started after the killing of a young boy by law enforcement personnel) are one example. The riots in the outskirts of Paris in 2005 (and more recently[5], rooted in problems of financial and social integration of immigrants[6]), as well as serious clashes between protesters and police in Italy[7] and the UK[8] (due to austerity measures that are part of the financial policy) are other examples. We have to look broader to the issue of security. The global security alert ought not to be limited to the islamist threat. There are many other sources of threat that need close attention. Some of them concern the way society and the social or economical system function. Combating international terrorism is only one of the puzzle pieces needed to create the whole picture of security.