info@itstime.it
ITSTIME > Security > 9/11 and the legacy of fear – by Maria Alvanou 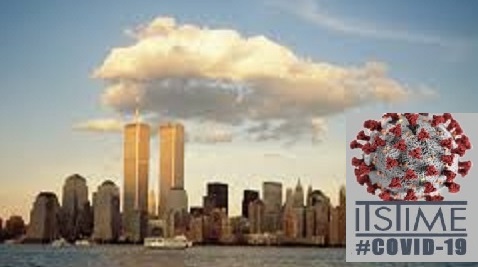 9/11 was undoubtedly a day that changed history. Although the world was no stranger to terrorism, the terror attack that took place on that day marked the beginning of the “war against terrorism”. The impact was devastating in various levels.

Terrorism became the number 1 threat to security and terrorists the most wanted criminals, although statistically the possibility of victimisation due to a terror attack remains lower than due to “ordinary crimes”. Moreover, the world understood that religion still plays a role in world affairs and affects human behaviour. Even for those who believe religion is nothing more than a tool clever leaders use for political purposes, still with this interpretation they cannot deny religion can mobilise people and make them act- sometimes towards the good and sometimes in very evil ways. Islam has been seen by many as the root cause behind the terror violence of international umbrella organisations like Al Qaeda (the organisation that started all)  and DAESH (the organisation that successfully continued and paved the road for those who follow and will follow) and a new round of conflict in societies started, fuelled by islamophobia. Discrimination, witch-hunting and even far-right attacks against Muslims started to be “justified” for some as a response to the terrible shock of the round of attacks 9/11 started.

Yet, maybe the worst result of September 11 was the acceptance of any policy and any measure governments have employed, because of fear. Terrorism reached its goal, it produced terror and terror became the force behind developments in society, the rule of law and legislation. The images of fire, destruction and death affected not only the American people, but people all over the world. The fear of something so awful happening again made them accept with none to little objection and resistance  new laws that challenged human rights and freedoms. Fear legitimised wars and invasions, “enhanced interrogation methods” (another name for torture), surveillance policies in internet and even in education, “incommunicado” during arrest by the police, airport checks and profiling that often disrespect human dignity, to name but a few conditions 9/11 shaped. Abu Ghraib and Guantanamo remind us how the Western world can go  centuries back in terms of legal and humanistic civilisation and how the “banality of evil” and dehumanisation can affect also the “good guys”. In addition, severe abuse of human rights backfired polarising and radicalising to violence Muslim youth, that felt this horrible injustice as a collective trauma.

Being critical to the ways governments and citizens have reacted to 9/11 doesn’t underestimate the evil terrorists perpetrated and it doesn’t endorse unfounded conspiracy theories about that day. It also doesn’t deny the need for security measures, for a modern legislation able to answer to contemporary challenges, even for severe- when needed- punishment of criminals responsible for hideous crimes against other human beings and the peace of societies. Being critical towards counter- terrorism policies and measures actually allows citizens to support measures that actually work and to show that terrorism has not won; that the aim of terrorists to change our world with their violence has not been reached; that fear is not their super weapon which can bring us to our knees. We uphold the values, the principles that make us different, that make us better than them. This gives us the moral right to condemn terrorists and argue that “the end doesn’t justify the means” when they argue violence is necessary in order to achieve their goals or they appear as “freedom fighters”.

Especially this year 9/11 holds such a timely message for the world. We are experiencing a pandemic and many already have called it a “second September 11”. It has changed our lives and it has made  governments take measures and enforce policies that were unthinkable before. From lockdowns to police violence and prosecutions against those who deny the necessity of the policies adopted,  measures can vary in intensity from country to country. There have been cases of police abuse and even inhuman behavior of people against supposedly carriers of the virus. Moreover, technology has been used to surveil and track down “pandemic cases” leading to the question how such an ability could be used by states tomorrow and how are citizens protected from any future abuse of powers. Fear once again dictates our response. This time “Covidphobia” leads to discriminatory and witch-hunting behaviour against anyone considered to contribute in the spread of the virus, and this doesn’t include only the carriers of Covid-19. The  new” terrorist” and threat to security seems to have become even the person that publicly questions the necessity of any of the pandemic measures.

This is the time to remain critical and show we have learned our September 11 lesson. Citizens should not deny the existence and danger of the pandemic (in the same way that they should not deny  9/11), nor disobey medical guidelines. However, they have the right to question measures adopted. This is the time that the dilemma “security or freedom” has been turned in to “health or freedom”. It has always been a pseudo-dilemma regarding terrorism, it is a pseudo-dilemma regarding the pandemic. We should demand that states take the best measures to protect our lives both from terrorism and disease, yet respecting our rights and liberties. We should ask for transparency in decisions, for scientific pluralism in the medical discourse about the necessity of any measures taken and proof that these measures are suitable and appropriate to fight the spread of SARS CoV 2. To be a responsible, law abiding citizen means to be an aware citizen, able to make sure the rules governing society and his/her life are in accordance to the rule of law and common sense.