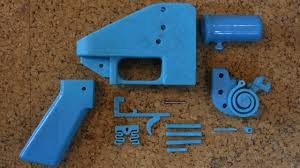 In 2015, Hong Kong authorities arrested members of a terrorist group planning to attack the city. The big news was that they allegedly tried to modify airsoft guns with a 3D printer[1]. Today, of the most circulating news regards the ban by an american federal judge on sharing gun blue prints on the web[2]. While in the US the issue is linked with First Amendment on freedom of speech/press and the Second Amendment and the right to bear arms, the printed arms issue is of general concern and could lead to alarming developments for security. Basically it comes down to the fact that in order to acquire firearms all one needs is a 3D printer and blue prints, so it is getting easier to acquire means to commit homicidal violence. This is alarming for the general prevention and countering policy regarding crime, but also especially regarding terrorism.

We have been witnessing an era in terrorism, when Islamists- but also far right perpetrators who have been copying them and some individuals that have been labeled by authorities as “self-inspired”- follow operationally the “lone wolf” pattern and taking advantage of internet instructions that are out there in abundance. Using explosives, but also much simpler weapons like knives, or vehicles, single perpetrators have succeeded in spreading death and fear. Especially the attacks with the use of knives or vehicles are considered very difficult to prevent. The fact that anyone can have a knife or a vehicle[3] leaves no traces for law enforcement so that they could work to prevent such attacks. On the other hand, explosives and a conventional weapon (pistol, machine gun etc) need a preparation, supply etc, thus they leave a trail that counter-terrorism authorities can pick up and possibly thwart the attack. So in a time when “diy terrorist operations” are trendy 3D printed weapons seem able to provide perpetrators with another possibility to act without leaving trace, even using a firearm, this time a homemade one.

From an operational point of view the advantages of printed guns are based exactly on the fact that the whole procedure (legal or illegal) of getting a firearm is no longer needed. Though there are counter arguments on the quality and the functionality of 3D firearms[4] as well as the prices of 3D printers, honestly for a terrorist even a plastic gun can do the job just fine. After all, functionality and prices are bound to change, as this type of technology will become more and more available to the public. Moreover, a “lone wolf” could make use of these “ghost guns” (as they are called) and a single shot is just good enough![5] Let’s imagine someone with a plastic gun getting on board an airplane and firing just this single shot[6]! Further more plastic as a substance could evade present security controls (for example metal detectors), and of course we should not forget the possibility of “mixed” guns, with parts from different materials and at the end the imagination of the criminal mind has no limits.

But apart from the operational point of view, there is another that concerns the terrorist or criminal mentality, and maybe this is the most important. We live indeed in the era of “diy” and internet instructions. We are learning how to make easy versions of ourselves. Literally instructions for everything seem to exist in internet and the notion is: “I can do it myself. It is easy”. This mentality appears to have entered also the world of crime, including terrorism. Of course there will always be big criminal organizations and crime professionals who will operate with “state of art” methodology, preparations, sophisticated tools etc. Organized crime needs professionalism and some of its activities require a relevant “sophistication” in the methods used. “Amateur”, “diy” criminals cannot stand the adversities and challenges of the crime world, where mistakes are not forgiven nor forgotten. Additionally, terror organizations cannot rely only in “spontaneous”, “self-inspired” attacks of “lone wolves” (and if we see the global trends, they don’t). Yet, public order and the security of people are not endangered only by “mega-criminals”, or “mega-terrorists”. As long as access to weapons becomes easier, then the possibility of more crime rises. This reality cultivates a new mindset. Crime becomes in a sense even loaded with less guilt. If a person today wants to acquire a gun, that person will have to enter the criminal world and communicate with its members with full understanding and sense that this is illegal, this is not ok. This alone can act as deterrence for some people. When the whole procedure involves one’s laptop and printer this understanding and sense of guilt is not there in the same way. We already know how that there is this difference from other examples of illegal behavior. People understand they are stealing, they know they are committing theft, when they physically remove an object from someone’s pocket, from a store etc. They don’t have the same sense of stealing (regardless the various campaigns and the law) when they download from internet an unauthorized copy of a CD. In the same way, getting a gun through the printer with internet instructions could alleviate the sense of committing a crime, especially in the context of ideologies doubting the regulating authority of the state.

Legally 3D printed guns are not permitted, but the practical ways that authorities can detect firearm printing before an attack are quite limited. Authorities would have to check what is happening inside a home and they need lawful reason and information that could justify a search warrant to do so. As technology is evolving, opportunity for crime also evolves and poses new challenges. Up to now terrorists have not used a 3D weapon in attacks. But we have to be ready for the day they do. When in May internet blue prints of firearms were downloaded, countries that have experienced “lone wolf” terrorism like Spain, Germany, Britain were among those in Europe with the highest download number[7]. This alone speaks for itself.

[2]The case is about the Defense Distributed website and it is pending in court, http://edition.cnn.com/2018/07/31/us/3d-printed-plastic-guns/index.html

[3] After vehicle ramming attacks have taken place, in some countries renting a vehicle is no more strictly regulated,

[4]Despite the facts that in 2013 a test made by the Bureau of Alcohol, Tobacco, Firearms and Explosives  on a certain gun resulted in labeling it as “lethal” and the Sweden National Forensic Center also characterizes 3D firearms as able to kill, http://edition.cnn.com/2013/11/14/politics/3d-guns/index.html, http://sputniknews.com/europe/201711231059357409-sweden-3d-printed-arms/ .

[5] There is the argument that these guns up to now are good enough for a single shot, see on such arguments http://www.extremetech.com/extreme/274499-3d-printed-guns-are-only-the-tip-of-the-diy-iceberg

[6] Already it is reported that reporters have smuggled such a gun via “Eurostar” train from London to Paris and even a reporter entered the Israeli parliament with one NY, http://www.dailymail.co.uk/news/article-2323158/How-Mail-On-Sunday-printed-plastic-gun-UK–took-board-Eurostar-stopped-security-scandal.html , https://www.nbcnews.com/technology/journalists-smuggle-3-d-printed-gun-israeli-parliament-6C1057032